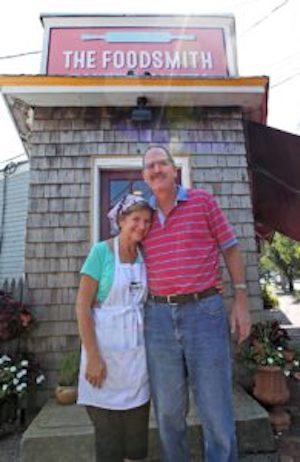 Ever thought you might want to strike out on your own and be your own boss? That’s what Laura Raposa and Steve Syre, a married couple who transitioned from long careers in journalism to running The Foodsmith, a bakery and lunch spot in Duxbury, Massachusetts, did. And they’re open to sharing the lessons they learned on their journey. Laura Raposa spent 30 years working as the Boston Herald’s gossip columnist. Her husband, Steve Syre, worked as a business writer/editor at the Boston Globe. As the newspaper business went south in the early 2000s, they both were losing interest in their work. In 2013, Laura left the paper and asked herself: “What do I have a passion for?” Since she was a little girl, Laura recalled, it was always about food and feeding people. After an internship with the Flour Bakery and Café to learn the ropes, she and her husband launched The Foodsmith. Laura is the “front of the house” manager while Steve directs the company’s finances and marketing. Laura and Steve will be interviewed by Andy Levine, creator and host of the Second Act Stories podcast series. Offered by Encore Boston Network

The event is finished.