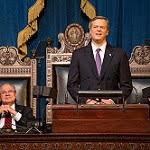 In his 2017 State of the Commonwealth address, Mass. Governor Charlie Baker celebrated the contributions of older adults and announced the launch of a new Council on Older Adults, focused on positive aging.

The Massachusetts governor used his 2017 State of the Commonwealth Address to draw attention to the contributions that older adults make every day.

“We must . . . think differently about how we support and engage older adults. The notion that people are fully retired at the age of 62 or 65 is inconsistent with what I see every day. And even if some have stepped back from what they spent most of their lives doing, most still have tons of time and talent available to do something else.

“Hey – I turned 60 in November. Sixty. I remember thinking that was ancient when my dad turned sixty. Now he’s 88 and still the smartest, most informed person I know.  And Dad – nobody gives better advice than you do.

“There are thousands of citizens in Massachusetts who are still very much in the game in their 60s, 70s and even 80s. And there’ll be more as our population continues to age.

“I’ll be signing an Executive Order in the coming weeks that will establish a Council on Older Adults. It will focus on policies and programs that make it possible for even more older adults and seniors to live vibrant, purposeful lives.”

Thanks to Encore Boston Network and ESC of New England for sharing the governor’s message.