The Transition Network is a powerful example of women 50+ filling a need in their lives: role models and a community for women leaving their primary careers. Founded in 2000 in New York City, it now has volunteer-led groups in 14 locations and more than 2,500 members. The Atlanta Journal-Constitution shares stories of that chapter’s founding and how TTN helps women find new opportunities in Women Redefining Retirement, profiling chapter co-founder Rhoda Margolis and newer member Gail Collier-Glover. 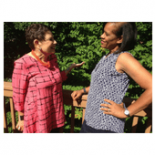 In the late 2000s, Rhoda looked ahead to her retirement as director of social work services at Jewish Family and Children’s Services and wondered “what’s next for me,” She spotted information about a Transition Network webinar and realized its focus was exactly what she needed: bringing women together in mutually supportive communities during times of transition and beyond, and developing group experiences to create new and enriching relationships.

Rhoda invited 15 friends to talk about their work identities, life after work and building a new community. Five joined forces to build the chapter. The leaders were women in their early 50s to late 60s defining a new life after their major careers. Some were married; some were single or divorced. Some were white; some African-American and Asian. Some were executives of multinational companies; others held executive positions at nonprofits. They bonded as a leadership group, benefiting from complementary skills and networks.

More recent member Gail Collier-Glover retired at age 60 from a technology career, and commented “I was feeling like a fish out of water. When I joined the group, I got a lot of support, and seeing women as much as 10 years older than me and still active was inspiring. I thought, OK, when I’m 70, I can do a lot.”

TTN is a great resource for women who want to connect, discover and impact their communities; it’s also interested in collaborating with other encore programs in its communities. (Check out the chapter list on the encore program map by entering “The Transition Network” in the search box.)

Free and Discounted Assess to Programs – The Encore Network offers a wide array of programs through the year. Typically led or organized by members of the Program Committee these programs are targeted topis of broad interest, featuring network members. These programs are free or offered at a reduced rate to members. Guests pay a higher fee to participate.